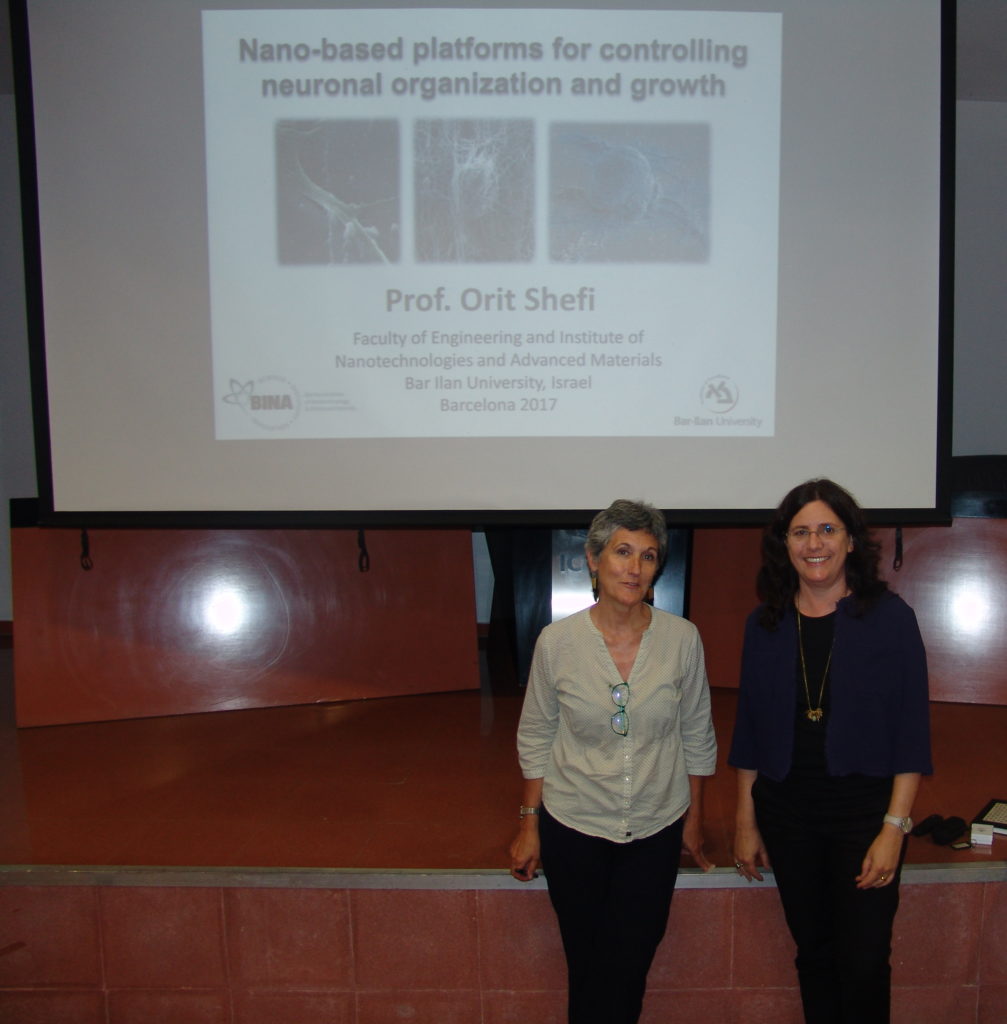 On the 12th of June 2017, Prof. Prof. Orit Shefi (picture, right) was invited by the N&N groups to give an ICMAB periodical lecture entitled: “Nano-based platforms for controlling neuronal organization and growth” Prof Orit Shefi comes from the Bar-Ilan Institute of Nanotechnology and Advanced Materials in Israel. She has a large expertise in manipulating neuronal growth and differentiation using substrates with controlled nano-structures. All the N&N group members attended and enjoyed the talk! 🙂

Written by Irene Anton on May 8, 2017. Posted in Conferences, General News, Uncategorized. 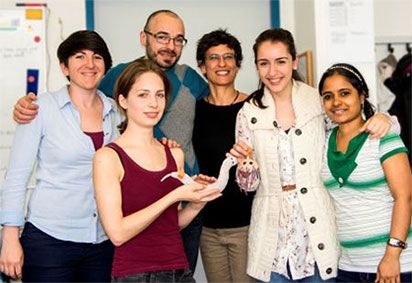 On Monday 8th of May, Natascia Vetura will give a seminar entitled:”C. elegans as screening tool to identify environmentally related nanomaterials targeting mitochondria“.The talk will take place in the Sala d’actes Carles Miravitlles at ICMAB. the seminar is organized by Anna Laromaine from the N&N group.

Natascia’s lab is interested in understanding the role of mitochondria in environmentally induced neuronal aging and diseases. To this end, Ventura’s team exploits C. elegans as a powerful genetic and screening tool to evaluate materials and chemical and unravel molecular mechanisms of mitochondria-associated diseases, with special attention revolved to the crosstalk between genetic and environmental interventions.

Hope to see you all there!

Anna Laromaine has been invited to the Leibniz Research Institute for Environmental Medicine to give a seminar on “Evaluation of inorganic nanoparticles in C. elegans”

Written by Irene Anton on May 2, 2017. Posted in Conferences, Group activities, Science outreach.

On May 2nd Anna Laromaine was invited by Prof. Ventura Lab to give a talk in their facilities. The Group of Natascia Ventura uses C. elegans as a screening tool to unravel molecular mechanisms of mitochondrial-stress, with special attention paid to the cross-talk between genetic and environmental interventions.

The seminar will take place in the IUF Leibniz Research Institute for Environmental Medicine in Düsseldorf, Germany and will be sponsored by EMBO. Anna Laromaine will talk about her experiments in the evaluation of inorganic nanoparticles using the model organism C.elegans.

Enjoy your visit to Düsseldorf Anna!

Written by Irene Anton on April 18, 2017. Posted in Conferences, News.

From 17th to 21th of April, Phoenix will host the Spring Meeting and Exhibit of the Materials Research Society (MRS). In this huge congress the following topics will be addressed:

Anna Roig is invited to give a talk named:

The N&N group has a great expertise in producing and characterizing bacterial cellulose, and in creating multiple nanocomposites based on this biopolymer. The group will also be represented by Anna Roig with two more oral communications:

Apply now for the Scientific Summer School on Materials for Biomedical Applications – June 19-22, 2017 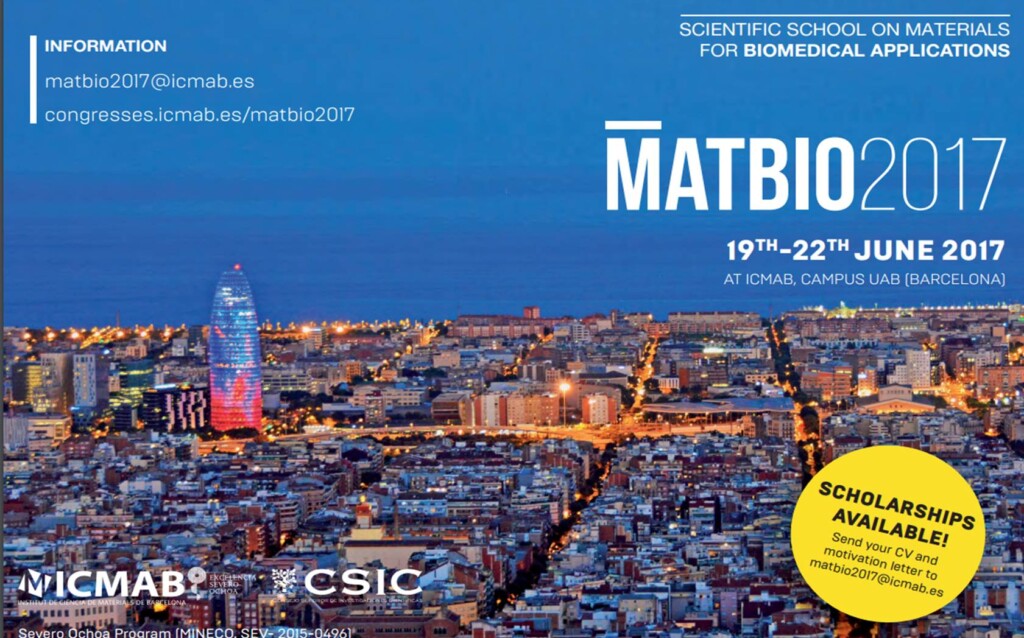 The school includes lectures from international and local speakers, hands on and management activities. As a consequence, this scientific school is an optimal opportunity to discover, learn and practise on material science focusing on fundamental science and applied research in the field of biomedicine.

Luo presented the poster “Evaluation of the nano-bio interactions between Au-NPs and Caenorhabditis elegans“ (Laura González-Moragas, Zhongrui Luo, Anna Roig, Anna Laromaine). It was his first time in Valencia and he really enjoyed the meeting! 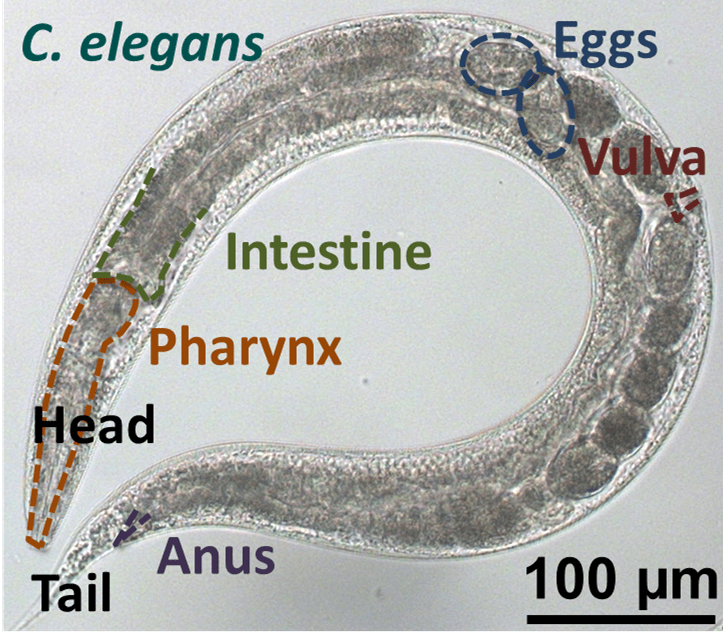 Anna and Luo will attend on 9th-10th March the VI Spanish Worm Meeting in Valencia (Spain).

Anna will give the talk on “Evaluation of albumin pre-coated SPIONS in cell culture and C. elegans“ on Friday, 10th March, at 9 am.

The Spanish Worm Meeting (SWM) is a biennial gathering of the scientific communitiy working with C. elegans. It covers a wide range of topics, including development, neurobiology, aging and disease, metabolism and new technologies applied to C. elegans.

We hope they enjoy the meeting!

The participation of Anna Laromaine at NanoTech 2017 (International Nanotechnology Exhibition and Conference) in Tokyo has appeared at the ICMAB website.

Anna could present there the patent “Method for the regeneration of plant tissues” developed by ICMAB-CSIC and CRAG (Centre for Research in Agricultural Genomics) to several companies.

Mihaela Popovici from IMEC is visiting the ICMAB this week

Written by Anna May on February 20, 2017. Posted in Conferences, News.

On Monday she gave an ICMAB Seminar at 12 pm at Sala d’actes “Carles Miravitlles”, entitled “Crystalline phase dependency of the electrical performance of oxide dielectrics for semiconductor applications”.

Short abstract:
Continuous dimensional downscaling of dielectrics and metals in semiconductor industry requires improved, non-defective metal-dielectric interfaces in order to preserve the intrinsic properties of the nanomaterials at thicknesses ranging between 5 and 10 nm. For such thin films, atomic layer deposition (ALD) is nowadays envisaged as the most suited deposition technique to deliver conformal layers in high aspect ratio structures. The crystalline phase often determines the dielectric constant and the bandgap energy and consequently electrical characteristics such as capacitance and leakage current density in metal-insulator-metal capacitors. Other specific properties like ferroelectricity seems to be driven by the presence of a particular phase (e.g. orthorhombic) with potential applications in ferroelectric field effect transistor fabrication.

Short Bio:
Mihaela Popovici is a Senior Researcher in the Semiconductor Technology and Systems Unit at IMEC, Belgium. She received her PhD in Materials Science and Engineering in 2004, at the Politehnica University of Timisoara, Romania. She had a Marie Curie fellowship at ICMAB in 2002-2003 in the field of magnetic aerogels and was post-doctoral fellow at Philips Research Eindhoven in Photonic Materials and Devices during 2005-2007. She has been working for almost a decade at the nano-electronics R&D center of IMEC in Leuven, Belgium on memory chip scaling. At present she is the technical leader of the metal-insulator-metal capacitor project for DRAM applications. Her main expertise resides in dielectric oxides and metal thin films development, physical and electrical characterization and design of complex materials stacks with applications in nano-electronic devices.

Anna Laromaine at the NANO TECH 2017 exhibition in Tokyo

Written by Anna May on February 13, 2017. Posted in Conferences, News.

Anna Laromaine will be at the International Nanotechnology Exhibition and Conference (NANO TECH 2017) within the CSIC Scientific Representation.

The CSIC will be one of the exhibitors, presenting novel products in nanotechnology: new functionalized composites of nanocellulose and fibrous clays, biosensors for simultaneous detection of several biological samples in solution, nanostructured networks for applications in energy, optical devices, microelectronics, etc., or devices to induce hyperthermia in cells through magnetic nanoparticles, among others. 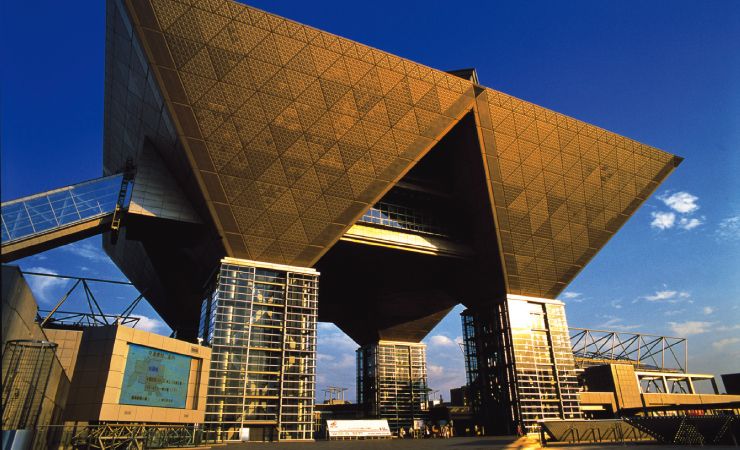