Written by Anna May on February 9, 2017. Posted in Conferences, News. 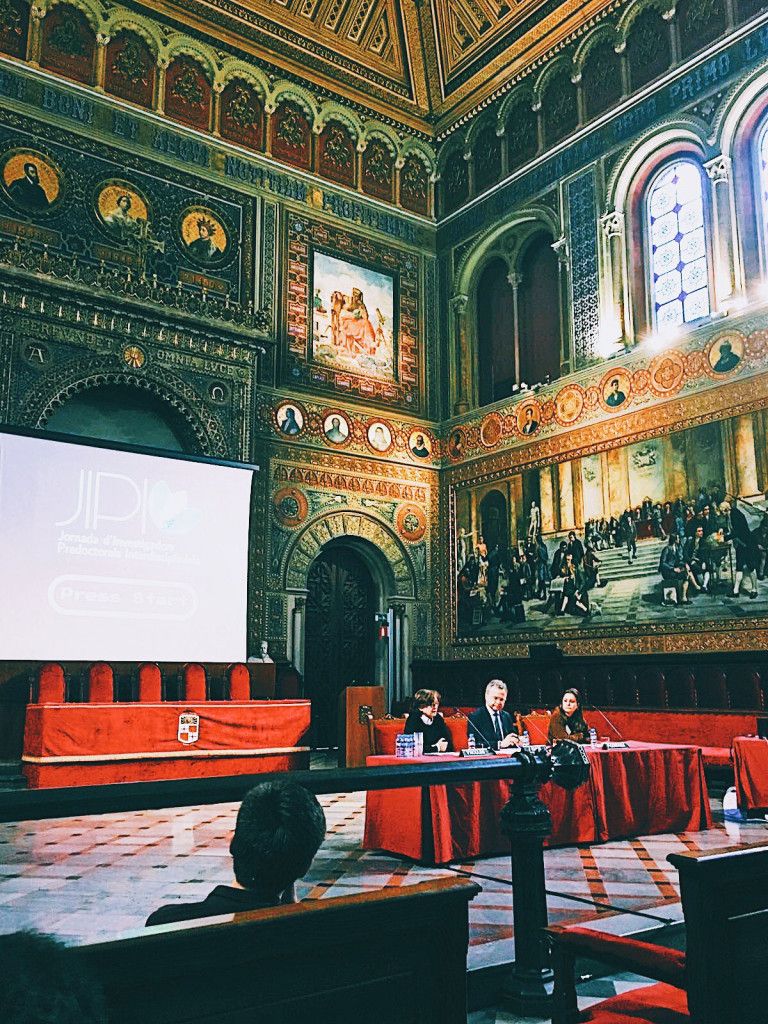 Today at the Paranimf of the Universitat de Barcelona there is the “Jornada d’Investigadors Predoctorals Interdisciplinària” (JIPI) -Interdisciplinary Meeting of Predoctoral Researchers-, from 8.30 am to 8 pm.

The JIPI is a meeting point for PhD researchers in Catalonia, where they can present their work and meet researchers of different fields.

Apart from the flash talks, divided in different topics (Applied sciences, Social sciences, Life sciences and Humanities), and given by 1, 2 or 3 speakers together, the attendees can participate in a speed-networking session, and in interesting debates. The topics of the debates of this year are “Women in research”, “Doctors and the private sector” and “Education in science”.

Irene Anton, Sole Roig and Ma Zheng from the N&N Group have attented the conference. From ICMAB, Júlia Jareño and Alexander Stangl, who presented the talk “Hot future for cold superconductors”, won the award of their session. Congrats!

You can follow the #JIPI2017 activities on twitter at @jipi_bcn and see the abstracts of the flash-talks and more information at their webpage and facebook page. 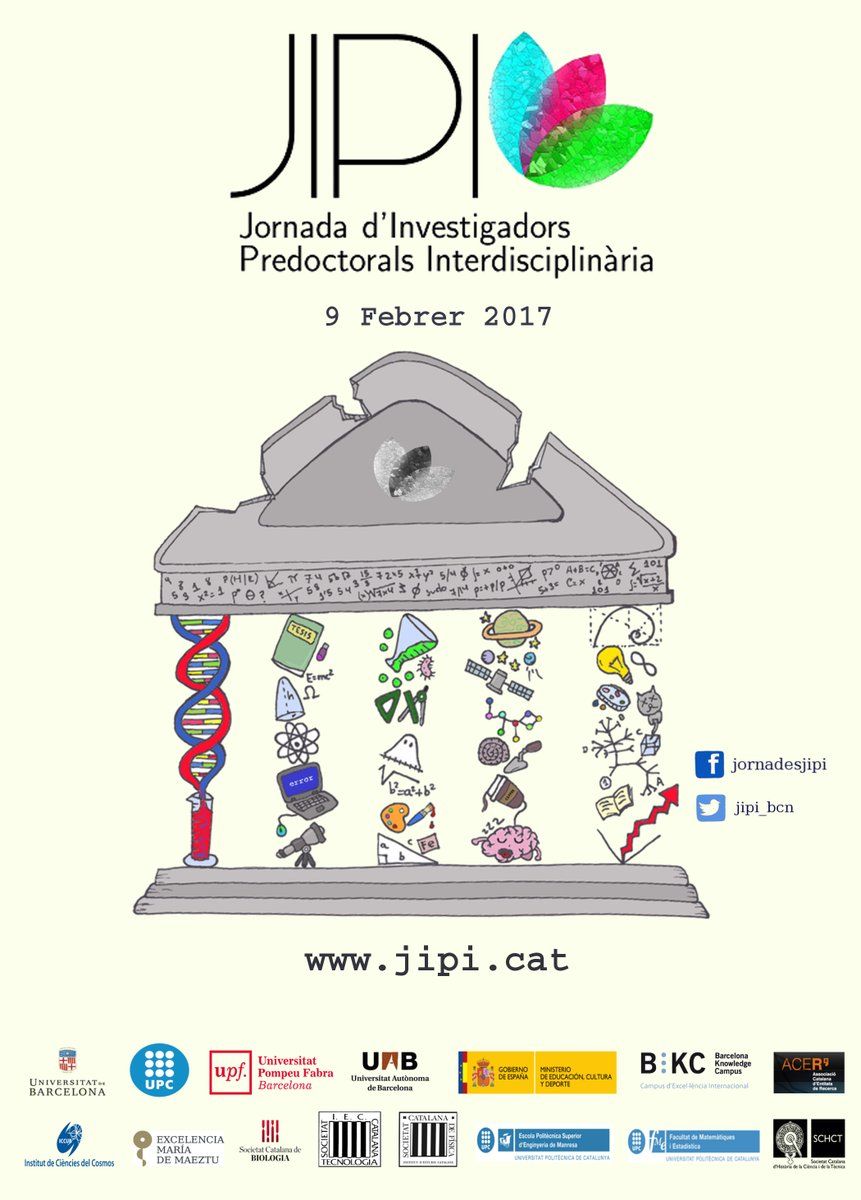 Prof. Stephen Sturzenbaum will give an ICMAB Lecture on toxicity of metals on biological systems

It is a pleasure for us to invite you to the ICMAB Lecture entitled: “Juggling essential and toxic metals – a worm’s eye view of a Toxicogenomic challenge”

By Prof. Stephen Sturzenbaum from the group of Toxicogenomics from King’s College London (UK).

Abstract: Some metals are exclusively toxic to biological systems and classified as being non-essential, others are essential for life. Nevertheless, above certain threshold concentrations all (including the essential ones) become toxic. Homeostasis of essential elements and detoxification of non-essential elements are thus vital drivers of well-being, longevity and survival. By exploiting genomic, transcriptomic and toxicological tools within the model nematode C. elegans we identified and characterized intricate pathways that not only form the foundations of metallomics but facilitate further explorations within the field of nanomaterials.

Short bio: Professor Stephen Sturzenbaum holds a personal chair in Toxicogenomics at King’s College London and was recently awarded a Senior Doctorate (DSc) from Cardiff University for his work on “Toxicogenomics on Terrestrial Worms”. Stephen pioneered the use of molecular genetic tools in the common earthworm, and in doing so was instrumental in establishing the earthworm as a sentinel soil macroinvertebrate model organism of environmental importance. Stephen’s second stream of work has focussed on promoting the use of the more established C. elegans model organism to address the burgeoning themes of metallobiology, toxicogenomics and nanoparticle toxicology. Laura González, from our group, who did her thesis on evaluating nanoparticles’ toxicity on C. elegans, did an internship at his laboratory during Feb-May 2016.

If you would like to arrange a meeting with Prof. Stephen Stürzenbaum please contact: Dr. Anna Laromaine (alaromaine@icmab.es)

Jordi Floriach Clark will present his work on “Techniques for Bacterial Cellulose Production, Modification and Characterisation” at UAB

Written by Anna May on January 18, 2017. Posted in Conferences, News, Projects. 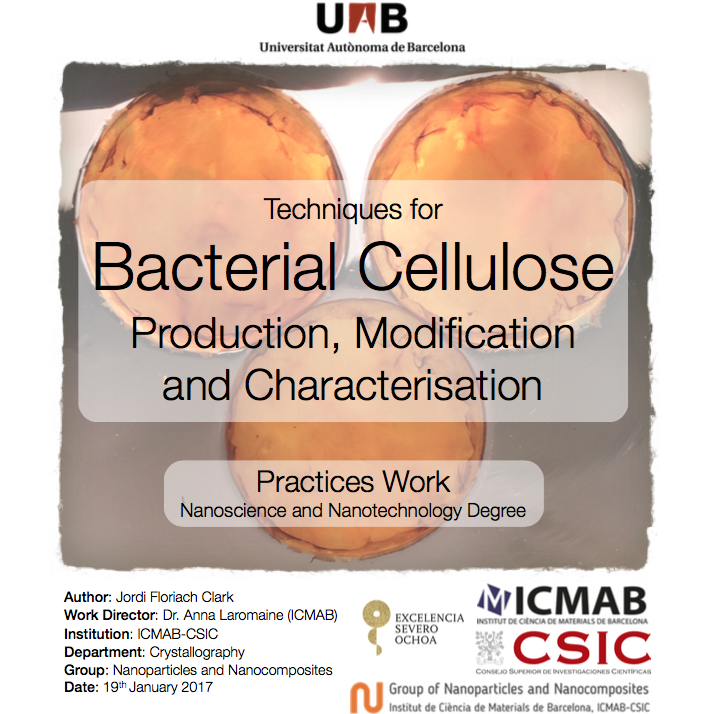 Jordi, student of Nanoscience and Nanotechnology at UAB, will present his work entitled “Techniques for Bacterial Cellulose Production, Modification and Characterisation“, next January 19th, at 9.30 am, at Sala de Graus II C5/1068 (Science Faculty, UAB).

Jordi has been with us for nearly 7 months, and he has been working under the supervision of Anna Laromaine, as part of his practical studies (UAB coordinator is Dolors Baró).

We are very happy that he will continue with us to do his Bachelor’s Final Project until next summer!

Today Joel N. Meyer from Duke University gives a Seminar at ICMAB on “Mechanisms of uptake and toxicity of Ag NP in C. elegans”

Written by Anna May on December 15, 2016. Posted in Conferences, News. 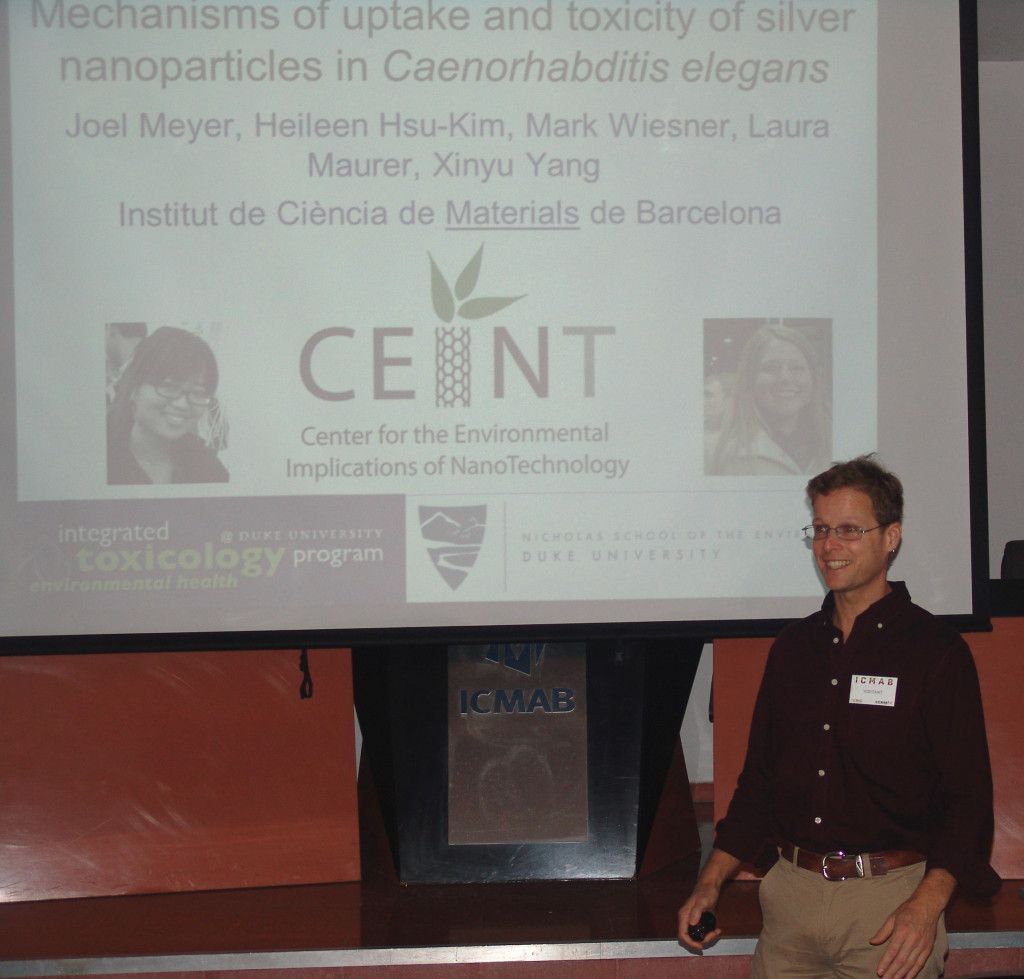 Prof. Joel N. Meyer will give a Seminar entitled “Mechanisms of uptake and toxicity of silver nanoparticles in Caenorhabditis elegans“, today, December 15, at 12 pm at ICMAB Conference Room Carles Miravitlles.

Prof. Joel N. Meyer is Associate Professor and Director of Graduate Studies at Nicholas School of the Environment and Center for the Environmental Implications of Nanotechnology (CEINT), at Duke University, NC, USA.

Engineered nanomaterials offer great opportunities due to their novel properties. However, there is concern that these novel properties may also result in deleterious effects on human and ecological health that are difficult to predict based only on an understanding of the chemical makeup. We tested a number of nanoparticles (NPs) for toxicity in the nematode model Caenorhabditis elegans, and found that certain silver NPs (AgNPs) were the most toxic of the NPs that we had tested. We therefore extended our studies to characterize environmental factors that might alter AgNP toxicity, as well as the uptake and mechanism of toxicity of AgNPs in C. elegans.

Because much AgNP waste is expected to end up in aquatic ecosystems, we tested the influence of environmental variables on toxicity. We found that higher ionic strength, the presence of natural organic matter, and sulfidation of the AgNPs (expected to occur in many environments after AgNP release) all significantly reduced Ag NP toxicity. Using physicochemical, genetic, and pharmacological rescue approaches, we found that the most toxic AgNPs -generally, the smallest- caused their effects largely via dissolution. Some AgNPs (typically less soluble due to size or coating) also caused toxicity via generation of reactive oxygen species, an effect specific to nanoparticulate silver. This effect was masked by the toxicity of silver ions except when dissolution was very limited. The toxicity of the tested AgNPs was almost never greater than would result from complete dissolution of the same mass of silver. We also found that endocytosis was an important mechanism for AgNP uptake. However, the specific mechanisms by which AgNPs or released silver ion cause toxicity remain unclear. Because AgNPs are used to kill microbes, and mitochondria are endosymbiotic descendants of bacteria, current studies are focused on testing the possibility that AgNPs cause some of their toxicity via disruption of mitochondrial function. 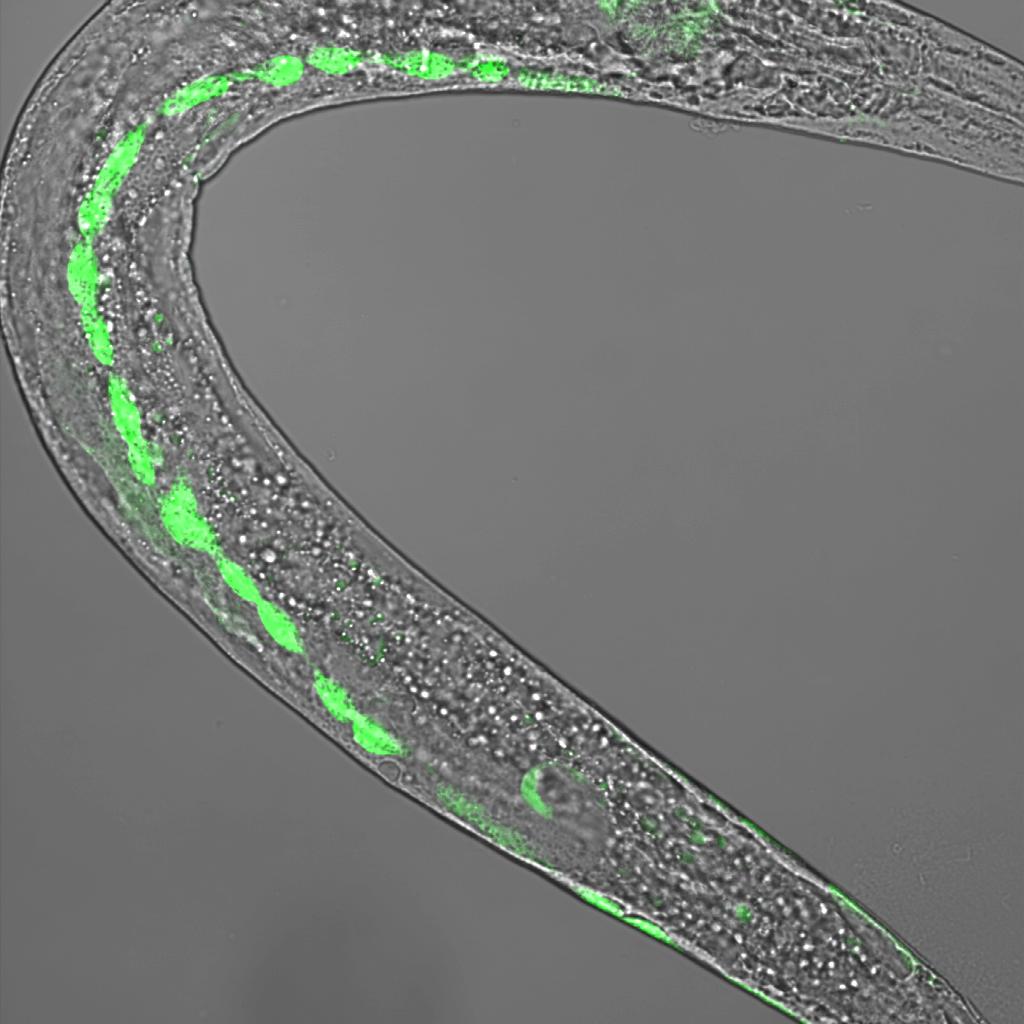 If you would like to arrange a meeting with Prof. Joel N. Meyer please contact: Dr. Anna Laromaine (alaromaine@icmab.es).

Written by Anna May on December 7, 2016. Posted in Conferences, News. 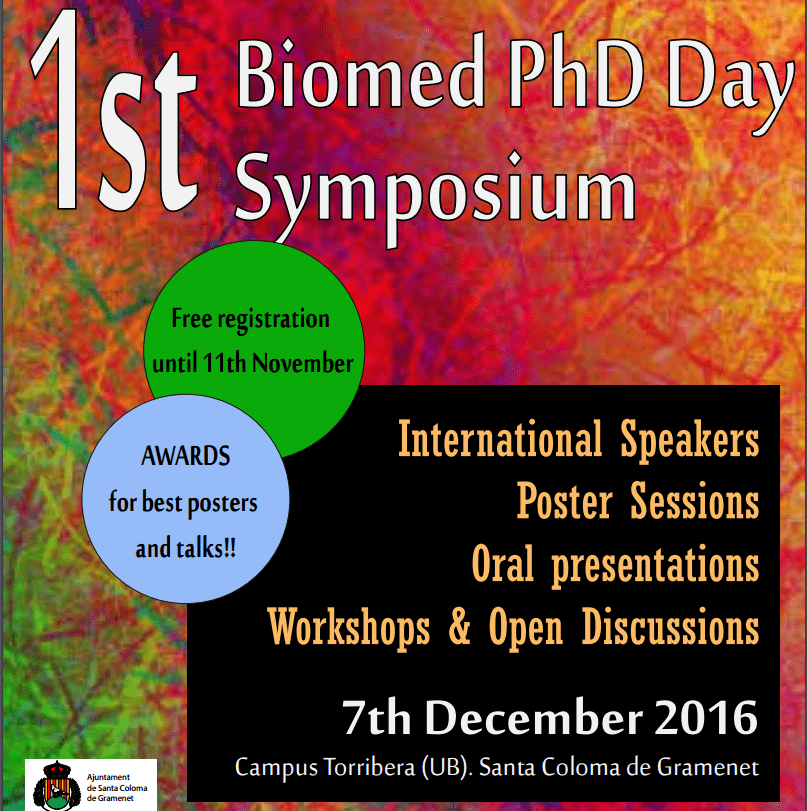 Some of the most experienced and renowned researchers in the field, such as Dr. Manel Esteller (Cancer Epigenetics, Bellvitge Biomedical Research Institute – IDIBELL), Dr. Antoni Trilla (Epidemiologist, Hospital Clinic, ISGlobal), and Dr. Patrick Aloy (Structural Bioinformatics and Network Biology, Institute for Research in Biomedicine – IRB), will give Invited Lectures in the symposium. 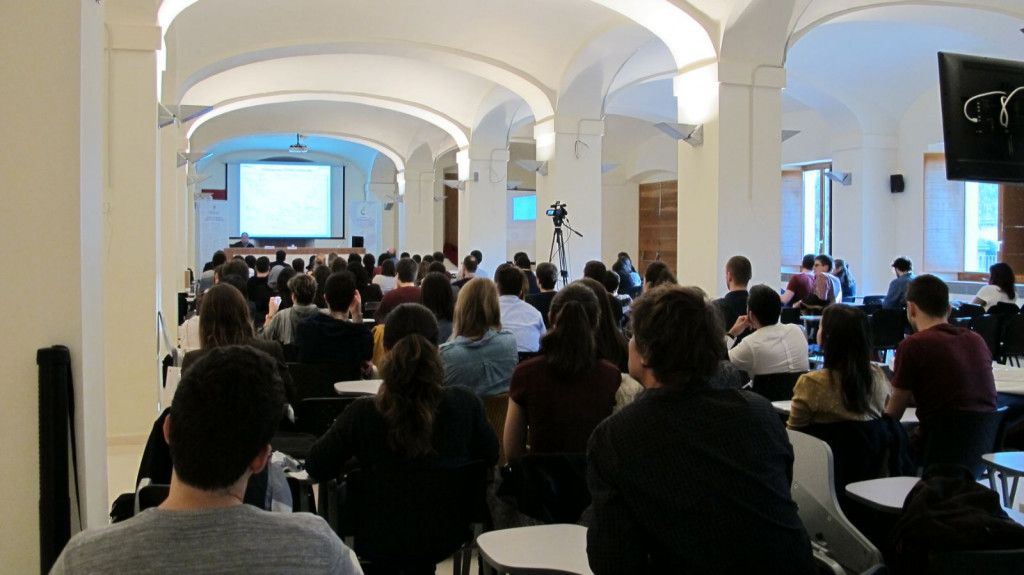 The symposium will also include some interesting workshops on subjects of specific interest for PhD students, such as “10 tips to get your paper published in high-impact journals and how to avoid rejections” by Dr. Marta Pulido, “The anomaly of women in science” by Dr. Sònia Estradé, “Business and technology transfer in Biomedicine: why the prospect of making money is not that bad” by Dr. Luís Ruiz Ávila or “Planning your Academic Career, with an Open Mind” by Dr. Elisabeth Pain, among others.

Written by Anna May on November 30, 2016. Posted in Conferences, News. 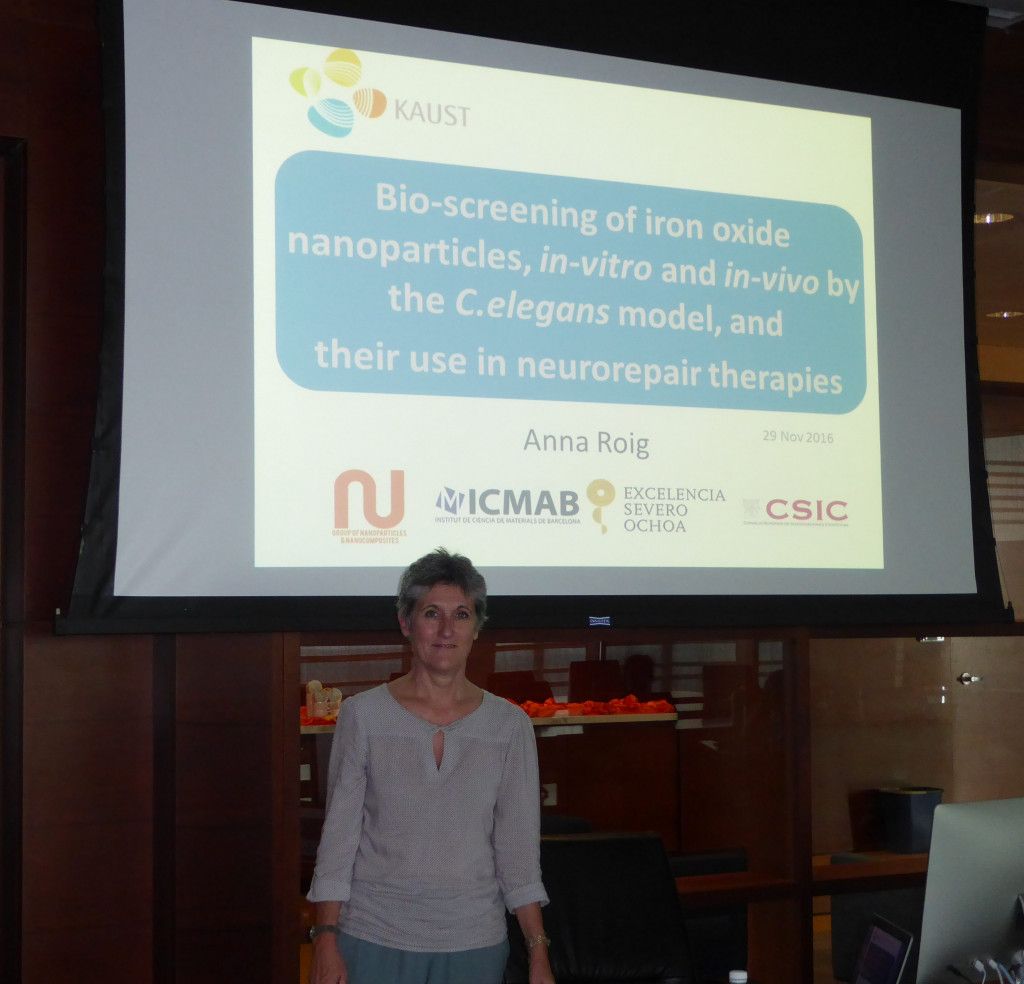 This week Anna Roig is visiting King Abdhullah University of Science and Technology (KAUST) in Saudi Arabia. She has been invited by Prof. Xixiang Zhang at the Physical Science and Engineering Division.

Anna has delivered a seminar today on “Bio-screening of protein coated nanoparticles: in-vitro and in-vivo by the C. elegans model“. She also visited the very well equipped labs and talked to students and faculty. 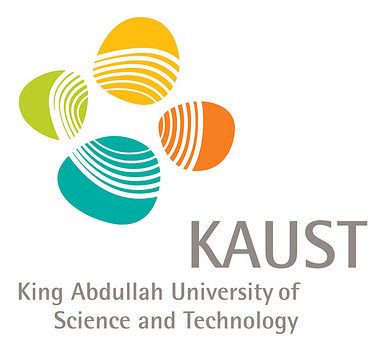 Written by Anna May on November 22, 2016. Posted in Conferences, News. 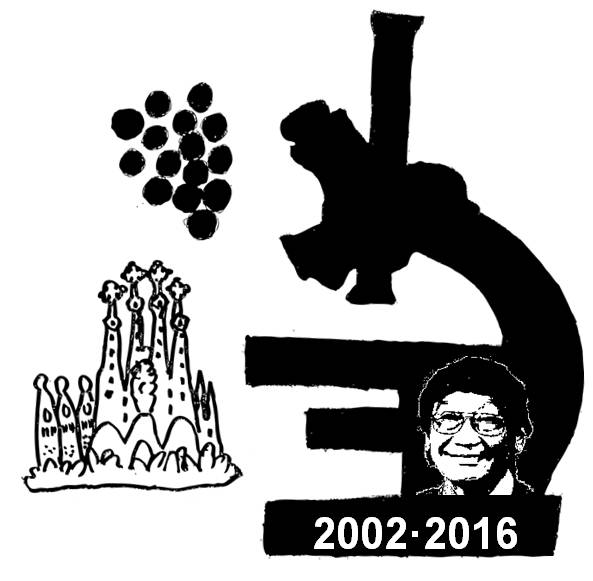 From November 22nd to 25th there is the XV Workshop on Rapid methods and automation in food microbiology at the Veterinary Faculty of the Universitat Autònoma de Barcelona (UAB).

The purpose of the workshop is to broaden and spread the theoretical and practical knowledge about innovative methods for rapid detection, enumeration, isolation and characterization of foodborne and waterborne microorganisms and their products.

The workshop will consist on different presentations from researchers and industry, lab sessions and exhibitions. Read the program here.

We hope that Deyaa learns new things and enjoys it!

Some images of the workshop: 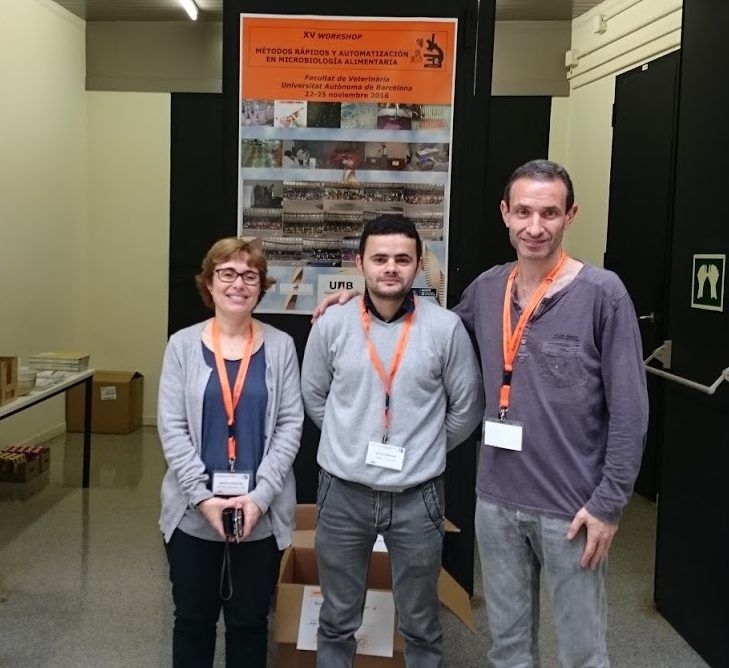 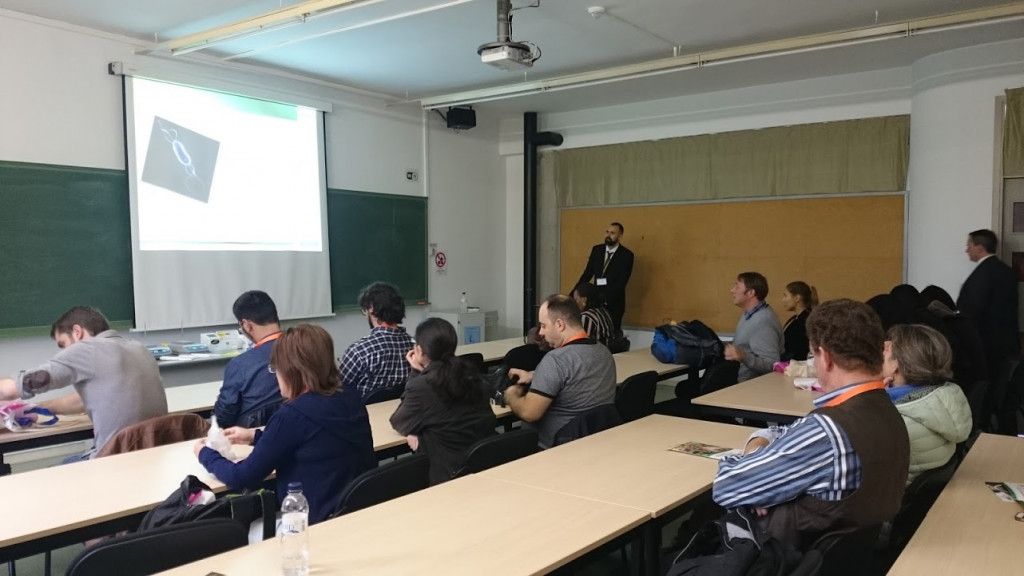 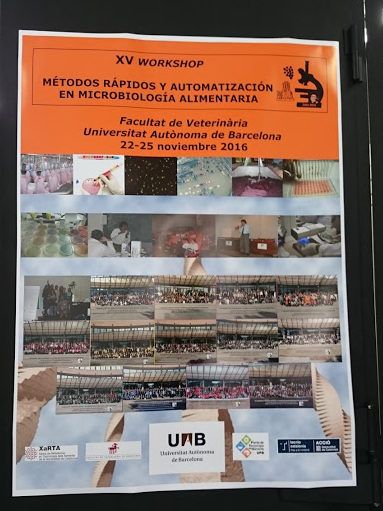 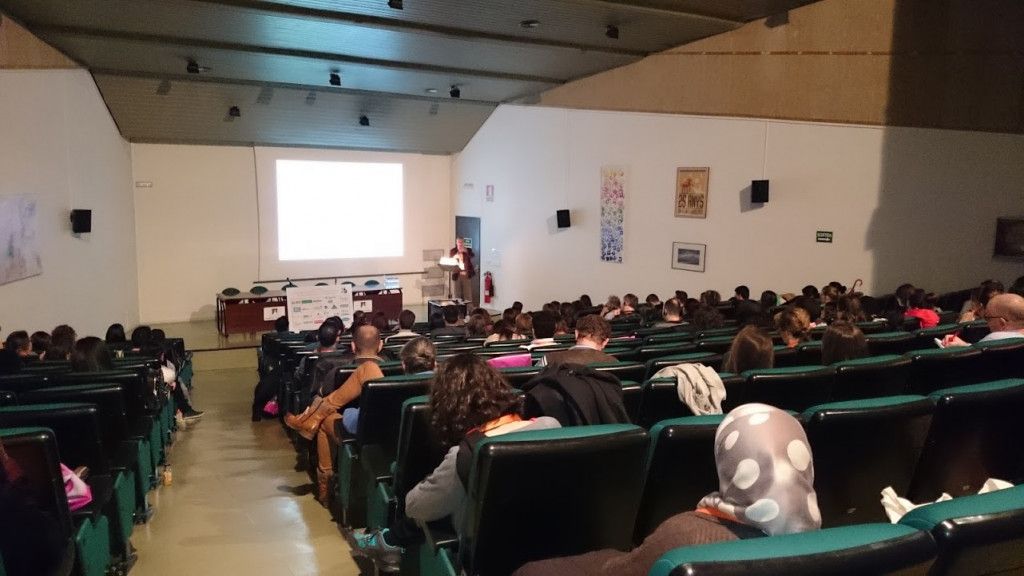 Seminar about “Spin-Offs. From Lab to Market” organized for researchers at ICMAB

Written by Anna May on November 17, 2016. Posted in Conferences, News. 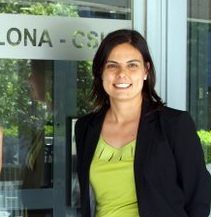 This morning, November 17th, at 9.30 am there is a session of “Spin-Offs. From Lab to Market”, within the Training Program FUNMAT (Severo-Ochoa Seminars), dedicated to all researchers and PhD candidates of the Institute.

Some members of the N&N group have attented the seminar. It is always good to know what your colleagues are working on and to have information about patents and spin-offs creation. In our group, Anna Laromaine is cofounder of the spin-off  OsmoBlue, which aim is to produce electricity from low-temperature heat.

The program of the seminar is the following:

More information and the program here.

Anna Roig attends the B·Debate on Imaging for Life: from Molecules to Diagnostics and Therapy at CosmoCaixa

Written by Anna May on November 8, 2016. Posted in Conferences, News. 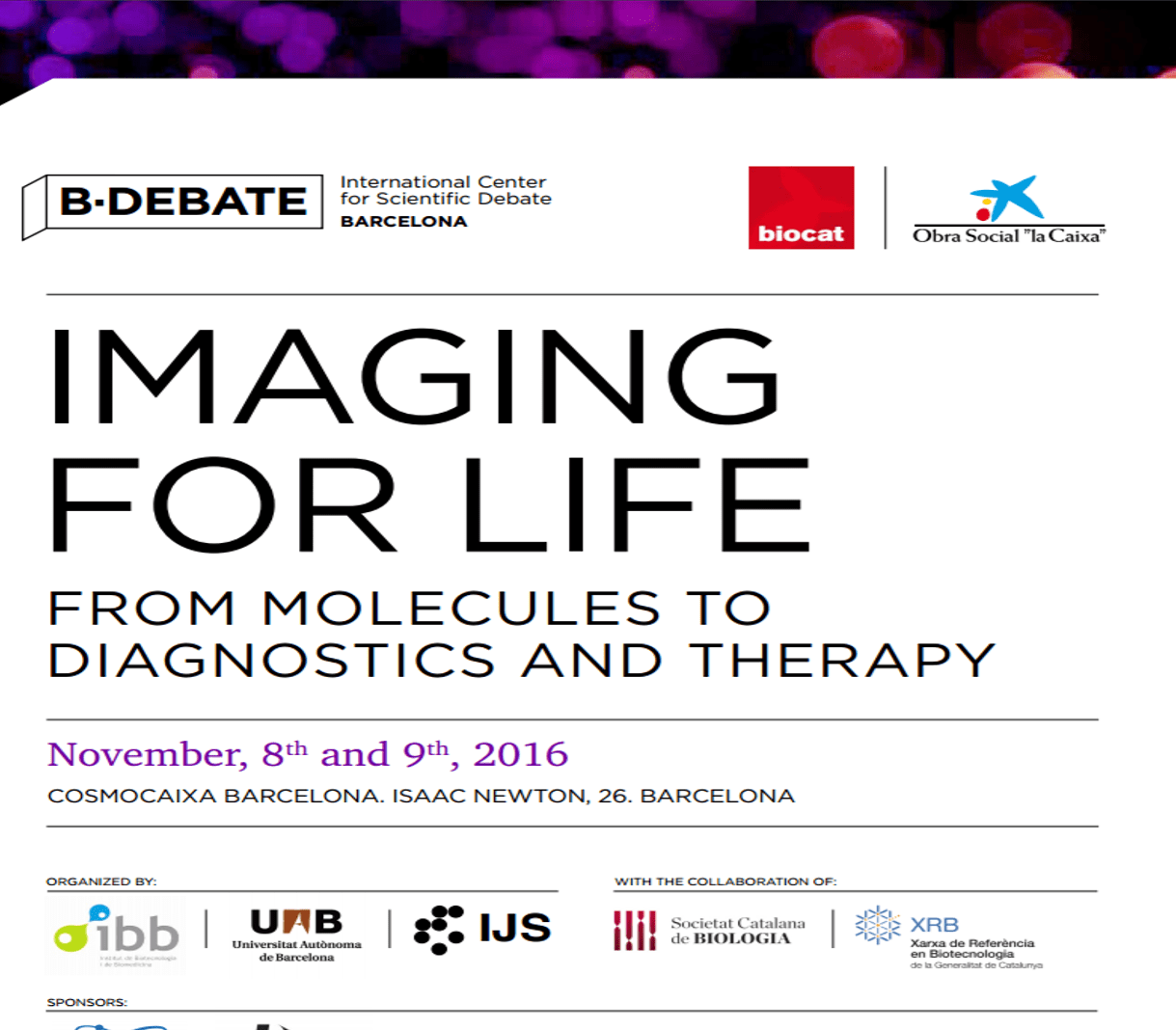 Anna Roig will attend the B·Debate on Imaging for Life. From Molecules to Diagnostics and Therapy, that takes place on November 8-9 at CosmoCaixa (Barcelona).

The objective is to bring together national and international experts in the field to discuss the future perspectives and strategies for the current challenges on molecular imaging.

The B·Debate will focus on molecular, cell, tissue and small animals research, and to their biomedical applications, including non-invasive diagnostic, imaging-guided surgery, multimodal scanning and theranostics. 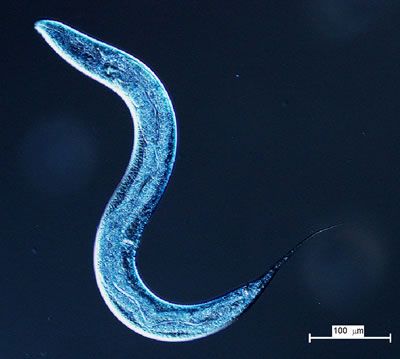 For sure this B·Debate will be useful for Anna and for the group, since imaging is a powerful tool to study the interaction of inorganic nanoparticles with living organisms, such as C. elegans, which is the topic of Laura González thesis, for example.

More information about the B·Debate: 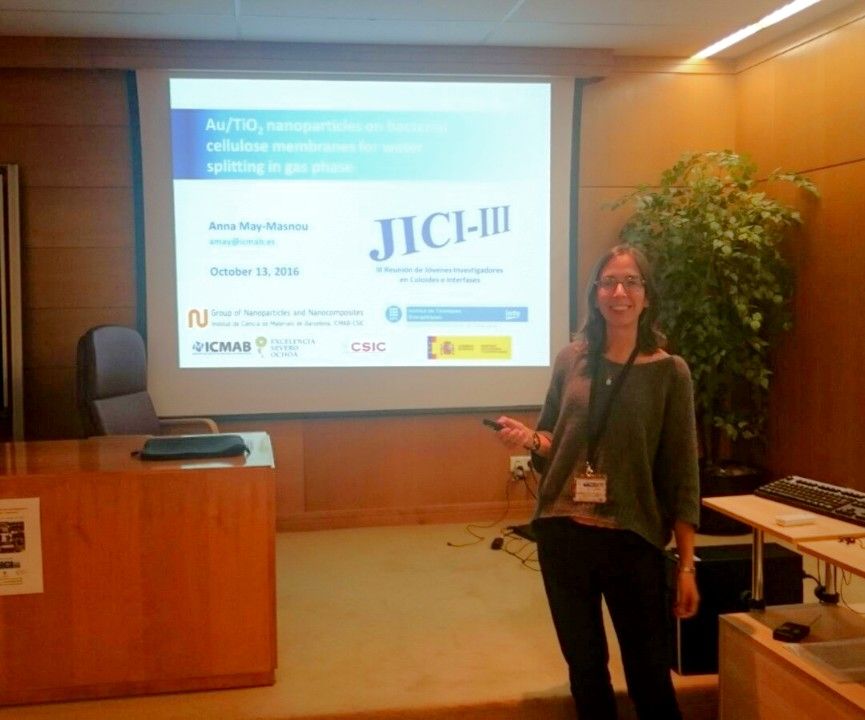 Anna May will give the talk “Au/TiO2 nanoparticles on bacterial cellulose membranes for water splitting in gas phase” in the III Meeting of Young Researchers in Colloids and Intrefaces (III Reunión de Jóvenes Investigadores en Coloides e Interfases), which is held in the Universidad Complutense of Madrid, during October 13-14, 2016.

The work presented is in the framework of the Engineering Bacterial Cellulose Nanocomposites project from ICMAB, in collaboration with Jordi Llorca and Lluís Soler, from the Institut de Tècniques Energètiques (INTE) at the Universitat Politècnica de Catalunya (UPC). 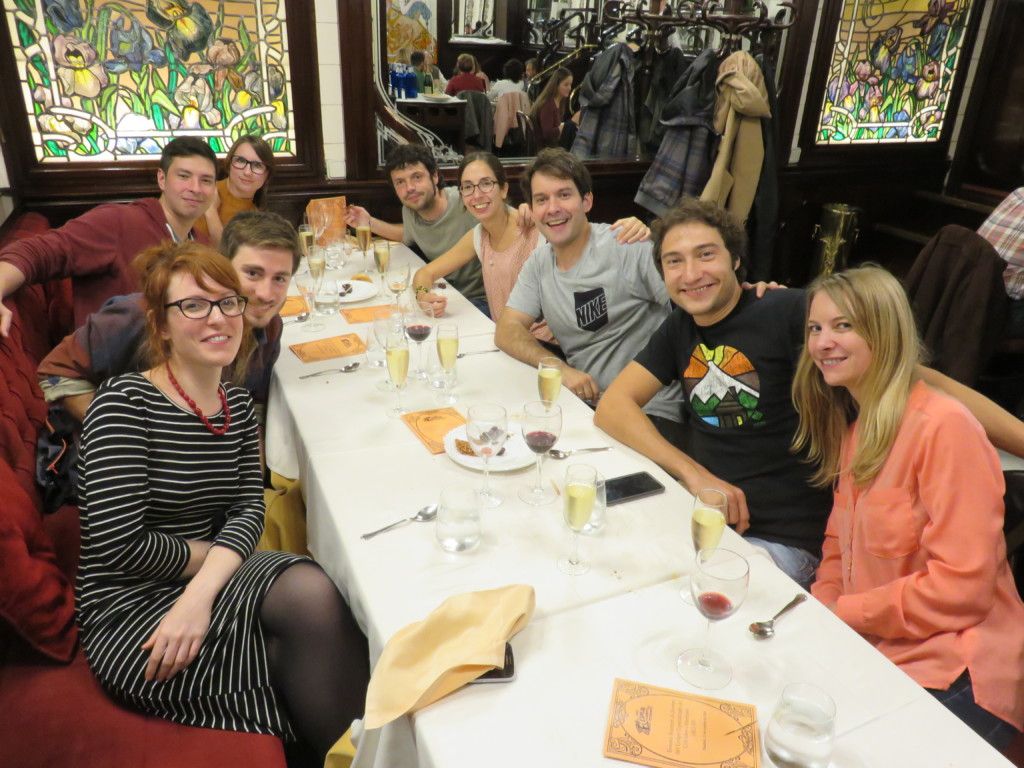 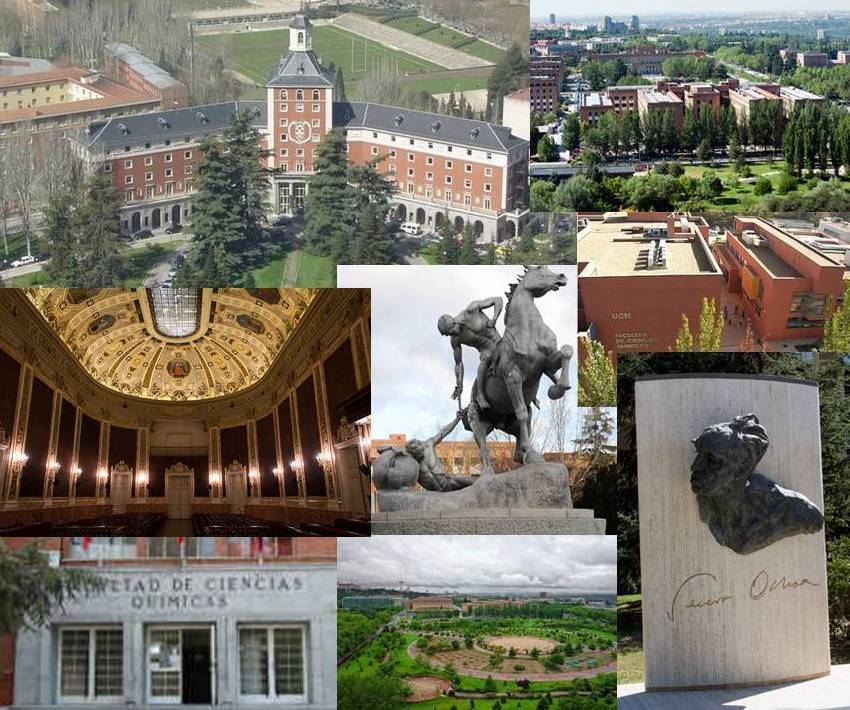