Written by Irene Anton on November 27, 2020. Posted in Awards and scholarships, General News.

We are happy to share with you that the project Novel Nanocellulose Patches to Treat Corneal Wounds (CORNEAL-BNC) founded by a Llavor grant has been selected as a finalist in the PREMIO BIOTECNOLOGÍA I+D+I 2020 from Premios Expoquimia 2020. This translational project joins forces with the Barraquer Clinic of Barcelona to develop novel solutions for the treatment of corneal wounds. Congratulations to all the researchers involved!

Written by Jan Grzelak on July 7, 2020. Posted in Awards and scholarships, General News.

Amanda Muñoz, a PhD researcher in the N&N group, became a finalist of the Biorender Graphical Abstract challenge with a visualization of her work with C. elegans and nanoparticles.

Written by Jan Grzelak on April 9, 2020. Posted in Awards and scholarships, General News.

Laura González, a former member of the N&N Group, has been awarded the PhD Extraordinary Award by Universitat Autònoma de Barcelona, for her doctoral thesis that was developed during the period 2016-2017. Laura’s thesis, “Evaluating inorganic nanoparticles in the living organism Caenorhabditis elegans”, was supervised by Anna Roig and Anna Laromaine.

Wenchao received the prizes for best poster and best oral presentation at AERoGELS conference in Santiago!

Written by Jan Grzelak on February 20, 2020. Posted in Awards and scholarships, Conferences.

Wenchao and Anna Roig attended the conference “Aerogels for Biomedical and Environmental Applications” that took place in Santiago de Compostela on 18-20 February. Anna gave a talk on bacterial nanocellulose as a cell culture platform and Wenchao presented a talk and a poster about his work.

Remei Escudero, former member of N&N Group and Bachelor Student in Nanoscience and Nanotechnology at the UAB, has won the 3rd prize of the Dresselhaus Awards, organized by the Catalan Society of Nanoscience and Nanotechnology (SCN2). Remei defended her work by presenting a poster that was evaluated by a jury formed by PhD fellows. The event took place on 17 December 2019 and the results were announced in January 2020.

On 3-4 October 2019, four members of the N&N group: Anna Roig, Anna Laromaine, Sole Roig and Irene Anton attended the  fourth International Symposium on Bacterial Nanocellulose in Porto (Portugal). This congress gathers international researchers to communicate and share the latest developments in this fast-moving and continually expanding field of Bacterial Nanocellulose. All the N&N attendees presented their work in oral presentations. Moreover, Irene Anton was awarded with the prize for the best oral sharp presentation of the symposium.
Well done! 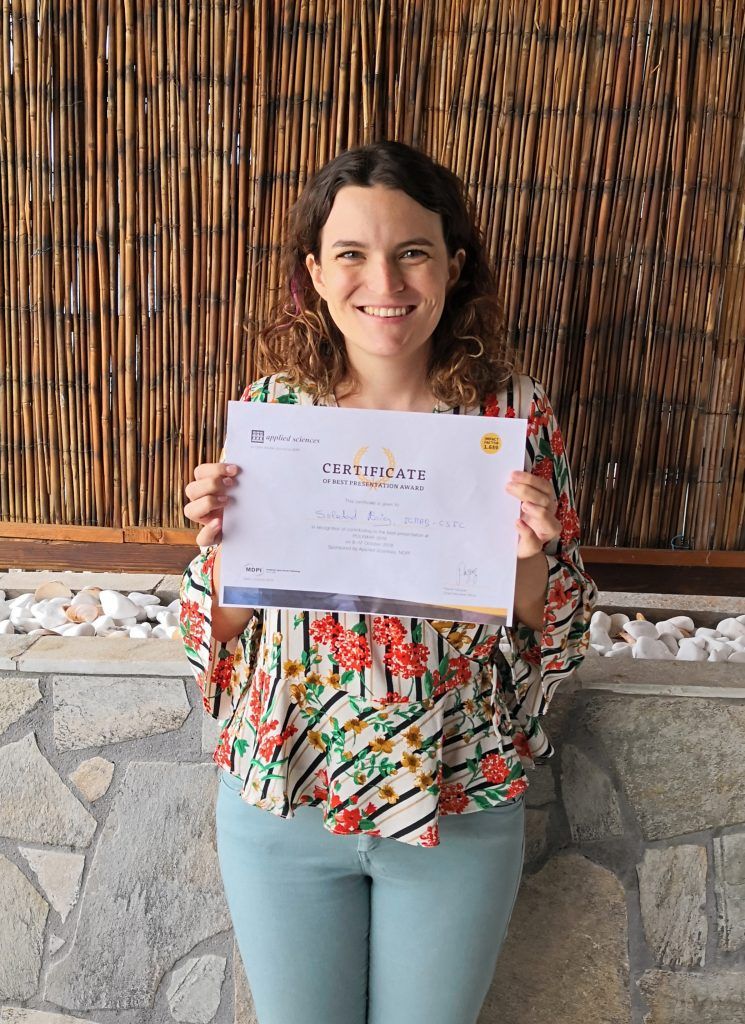 From the 8th to the 12th of October 2018 Sole Roig, PhD candidate at the N&N group, participated in the 2nd Conference in Polymer Science (POLYMAR) dedicated to biopolymers and taking place in a cruise through the Aegean sea. Her presentation “Microstructuration and functionalization of bacterial cellulose” was awarded with the Best Oral Presentation by an early stage researcher price sponsored by Publishing MDPI, congratulations Sole!

“POLYMAR2018 was a very interesting congress with a new format I have never seen before. The industrial point of view of most of the talks offered me the possibility to learn new approaches that we can apply on our lab in order to make easier the commercialization of the materials we are investigating.”

Written by Irene Anton on July 25, 2017. Posted in Awards and scholarships, General News. 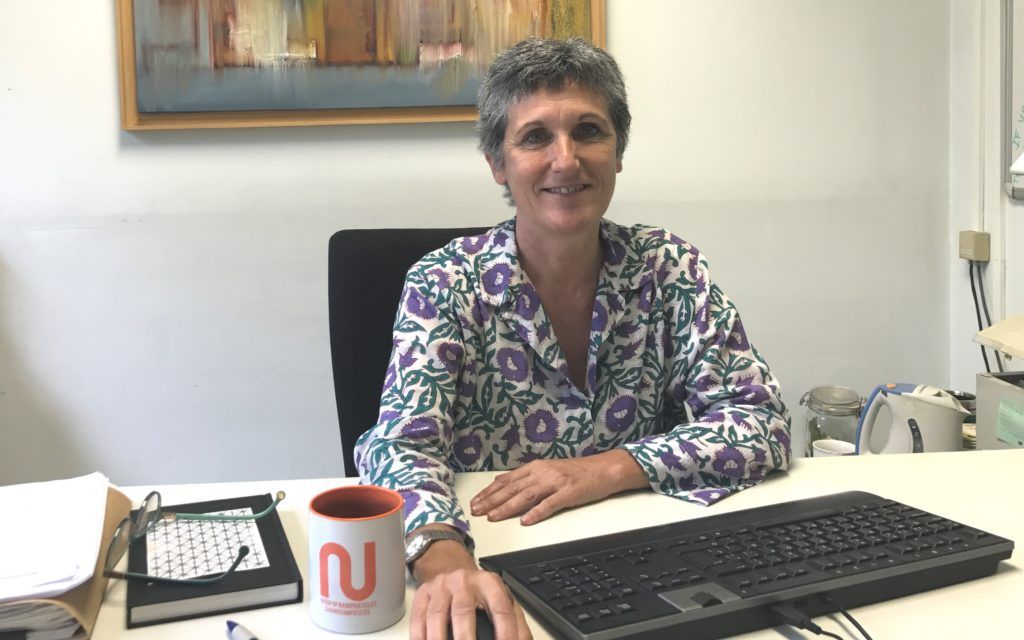 Anna Roig has been awarded with the Albus Award 2017, one of the Scientific Awards offered by Grifols, the pharmaceutical and chemical multinational company. The Award consists of 50,000 € to carry out the project “Albumin-iron oxide nanocages”.

The Albus Program is an annual international award focused on innovative ideas related to albumin and its role as a therapeutic product. The Program offers two awards of 50,000 € each year. The proposals are assessed by an independent review committee formed by world-wide recognized experts.

Anna’s “Albumin-iron oxide nanocages” project gets inspiration from the apoferritin nanoconstructs. It aims at investigating if albumin nanocages, consisting of a few units of albumin self-assembled and self-standing, can be formed by using inorganic iron oxide nanoparticles as semi-sacrificial templates. The albumin nanocages could then find application as a nanomedicinal product for imaging and drug delivery.

The winners will be given their Awards at a Ceremony that will take place on October 3rd, 2017 in Barcelona.

Written by Irene Anton on June 13, 2017. Posted in Awards and scholarships. 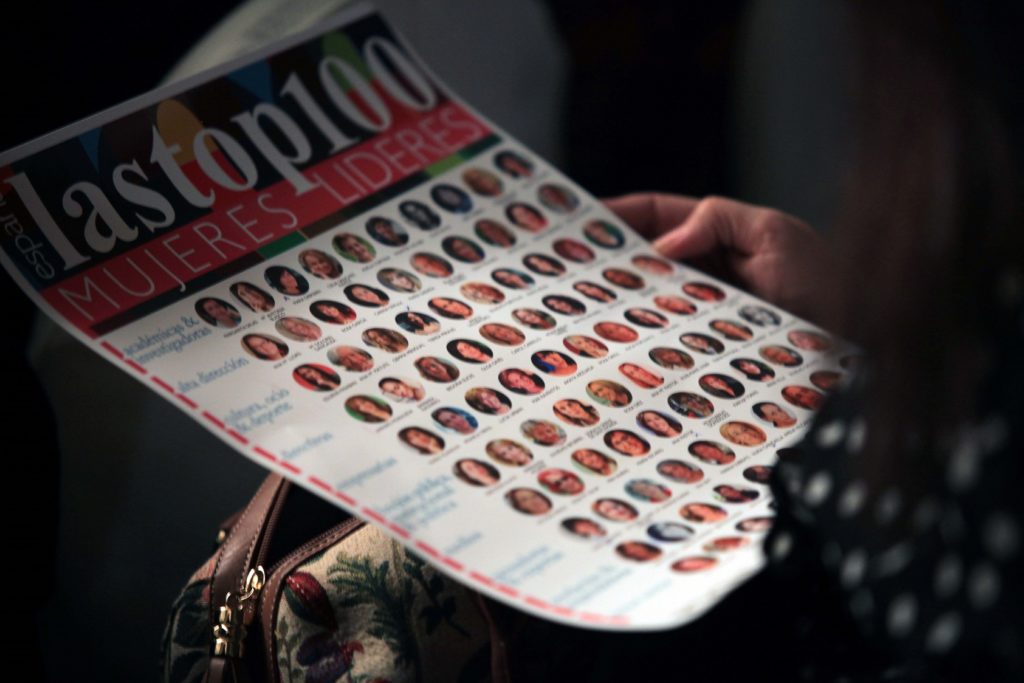 Anna Laromaine has been selected as a candidate for being named as one of the Top100 female leaders in Spain in the  category of researchers and academics.
The voting is already closed and the results will be announced on the 21st of June 2017 in Madrid. In this gala, 10 women will be priced for each different category. The event is organized by MujeresyCia and is aimed at making female talent visible.

We wish good luck to Anna!

Written by Irene Anton on April 24, 2017. Posted in Awards and scholarships, News.

As we announced before, on Friday 21st of April Miquel Torras received his Sant Jordi Price 2017 at the IEC: Institut d’Estudis Catalans.
The ceremony took place at the Prat de la Riba hall with the presence of  Joandomènec Ros, president of the IEC, Jana Balacciu winner of the international price Catalònia and Carme Forcadell the president of the Catalan Parliment.

Here Miquel says a word of thanks to the IEC and those how supported his work: