Hot off the press: New paper in Acta Biomaterialia!

Written by Anna May on February 8, 2017. Posted in New publications, News.

The paper is a result of a collaboration between the NN Group at ICMAB (González-Moragas, Roig and Laromaine), the ICFO-Institut de Ciències Fotòniques (Berto, Vilches and Quidant), the European Molecular Biology Laboratory, EMBL in Heidelberg, Germany (Kolovou, Santarella-Mellwig, Schwab) and King’s College London in UK (Stürzenbaum).

Gold nanoparticles (AuNPs) are present in many man-made products and cosmetics, and are also used by the food and medical industries. Tight regulations regarding the use of mammalian animals for product testing can hamper the study of the specific interactions between engineered nanoparticles and biological systems. Invertebrate models, such as the nematode Caenorhabditis elegans (C. elegans), can offer alternative approaches during the early phases of nanoparticle discovery.

Here, we thoroughly evaluated the biodistribution of 11-nm and 150-nm citrate-capped AuNPs in the model organism C. elegans at multiple scales, moving from micrometric to nanometric resolution and from the organism to cellular level. We confirmed that the nanoparticles were not able to cross the intestinal and dermal barriers. We investigated the effect of AuNPs on the survival and reproductive performance of C. elegans, and correlated these effects with the uptake of AuNPs in terms of their number, surface area, and metal mass. In general, exposure to 11-nm AuNPs resulted in a higher toxicity than the larger 150-nm AuNPs. NP aggregation inside C. elegans was determined using absorbance microspectroscopy, which allowed the plasmonic properties of AuNPs to be correlated with their confinement inside the intestinal lumen, where anatomical traits, acidic pH and the presence of biomolecules play an essential role on NP aggregation. Finally, quantitative PCR of selected molecular markers indicated that exposure to AuNPs did not significantly affect endocytosis and intestinal barrier integrity.

Hot off the press: New article accepted in Acta Biomaterialia! 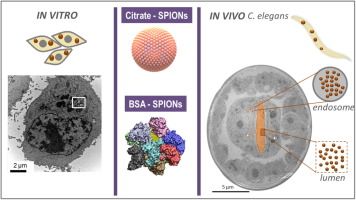 Abstract: Nanoparticles, whose surface adsorbs proteins in an uncontrolled and non-reproducible manner will have limited uses as nanomedicinal products. A promising approach to avoid nanoparticle non-specific interactions with proteins is to design bio-hybrids by purposely pre-forming a protein corona around the inorganic cores. Here, we investigate, in vitro and in vivo, the newly acquired bio-identity of superparamagnetic iron oxide nanoparticles (SPIONs) upon their functionalization with a pre-formed and well-defined bovine serum albumin (BSA) corona. Cellular uptake, intracellular particle distribution and cytotoxicity were studied in two cell lines: adherent and non-adherent cells. BSA decreases nanoparticle internalization in both cell lines and protects the iron core once they have been internalized. The physiological response to the nanoparticles is then in vivo evaluated by oral administration to Caenorhabditis elegans, which was selected as a model of a functional intestinal barrier. Nanoparticle biodistribution, at single particle resolution, is studied by transmission electron microscopy. The analysis reveals that the acidic intestinal environment partially digests uncoated SPIONs but does not affect BSA-coated ones. It also discloses that some particles could enter the nematode’s enterocytes, likely by endocytosis which is a different pathway than the one described for the worm nutrients.

Congratulations to all the authors!